Whenever I write about economics; I like many writers look to my own experience to comprehend the changes that have taken place in our society. Frequently I look back to my childhood for inspiration partly for reasons of nostalgia, but also because I mourn a way of life that has passed. The rural economy of my childhood has been replaced by the corporate business farms of today. British television with series such as ‘Downton Abbey’ and ‘Heartbeat’ refer back to an England of my childhood. I’m not a hundred years plus but the rural society pictured in Downton Abbey survived well into the 1950’s and ’60’s. However these programmes never make reference to the ‘Great Desolation’ that began then and continued until the population that depended on the rural economy had been largely removed from the land to the towns.

Our rural community was broken up following the decision of the landowner to become a tax exile and pass the land unto his son. His son was one of the new generation aristocrats in whom the tradition of ‘noblesse oblige’ had been replaced by the much harsher one of profit maximisation. In business terms the estate was under performing and his his first priority was to get the costs under control and increase its revenue. As the main cost was wages, this meant the mass dismissal of estate workers. All the forestry workers were given immediate notice. They were to be replaced by contractors who could be used as and when needed. Game keeping staff were reduced from five to two. Pheasant shooting would be restricted to those parts of the estate that could produce the greatest number of pheasants. Rather than the shoot being for friends and family that is the the old nobility, the new guests would be paying guests. These paying guests would expect to get a return on their money, so all that mattered was maximising the number of birds to be shot on shooting days. Consequently there became a curious case of over production with so many pheasants being killed, that many had to be buried on the estate grounds because no market could be found for them. The only group exempt from the staff cull were the gardeners who could maintain the estate gardens, which could be open to the public at a price. 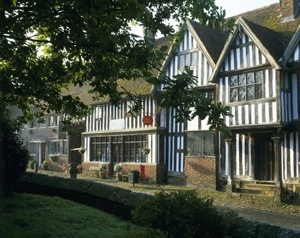 Having got rid of large numbers of workers, their houses were now freed up for sale or rent. The mock Tudor dairy from were I collected the family milk was converted into up market bijou residences for wealthy ‘out of villagers’. The working poor were dismissed from the countryside and forced to give up their attractive country cottages for houses on the council estate in the nearby town. Out of sight out of mind. When our family moved to this estate my father said he choose the job because the owners had a reputation for treating their staff well. There were even a row of modern day alms houses for retired workers. However welfare is cash expensive and in contemporary Britain employers only recognise that their obligations go only as far as providing a wage for their workers, welfare is the responsibility of the estate.

There was one further problem, the numerous small family farm tenancies did not earn a sufficient return on their land. Bringing a land agency who were notorious for their ability to get recalcitrant tenant farmers off their land was the solution. Immediately they enforced a rent review on the tenant farmers and the new high rents forced many out of their tenancies. They used even tougher tactics on the few that remained. One such tenant farmer suddenly found that his farm had two owners. Contacting these two new owners was difficult and getting them to agree on any developments on the farm was impossible. The tenant was forced to capitulate and give up his tenancy. This freed up one of the most beautiful farm houses on the estate for sale. Who bought it I don’t know but they paid an extortionate price for a part of one of the most desirable parts of the English countryside.

Strangely enough this new brutal landowner gained a reputation as a local beneficiary. Probably because he was always distant from the cruelties inflicted in his name. He gave money to the local community but this was not sufficient recompense for the devastation he wrought on the estate community which I remember with great affection.

Inevitably the justification for this cruelty was technology. The old high cost labour intensive methods had to go and be replaced by the new low cost technology. Large scale industrial factory type farms have replaced the small family farms of the past. Far more milk is now produced in the new dairy factories than was ever produced in the old milking parlours. There is as a consequence a problem of over supply of milk. This over supply has enabled the super market chains to drive a hard bargain with the farmers who are desperate to sell their milk. It is likely that only the huge low cost agri-business dairies will survive with the few remaining small milk producers being forced out of business. These huge dairy farms impose huge social costs on the community. To keep alive a huge herd of cows that contain many sickly animals requires the abuse of antibiotics. This user use has contributed to the problem of the development of drug resistant bacteria. There is also the attendant pollution problem, there is I believe nothing more unpleasant than a slurry pond.

To keep costs down these cows are kept in large numbers and fed drugs to increase their milk yields. Physically maltreated cows kept in overcrowded unhealthy conditions are a reservoir of disease, it is no surprise that TB is endemic in the British dairy herd. TB as always been a problem for dairy farmers, but it was a manageable problem in the past with small dairy herds of grass fed healthy cows.

What is never questioned in the agricultural community is the real efficiency of the new capital intensive farms. When the EU rewards farmers with a output based subsidy it rewards those farmers with the highest output regardless of the economic costs. Evidence shows that a disproportionate share of EU subsidies go to a relatively small number of agri-business farms, the corn barons of East Anglia are but one example. Without the EU subsidy they would go out of business as they would be revealed as uneconomic businesses over dependent on EU subsidies. Farming is all too often organised to maximise EU subsidies, rather than meet the needs of consumers.

There is also as a consequence of the change in agriculture support industries, that is the demise of the manufacturers of agricultural machinery. Fordson, Massey Ferguson and David Brown produced tractors and equipment ideally suited to the small British farm. When British farming switched to industrial scale production it opened up the market to foreign predators who specialised in making machinery for the new industrial farms. Relatively small in scale all the manufacturers of British farm machinery have since disappeared from the scene.

The drive to exploit all resources whether they be labour, livestock or land has led to abuse of that most precious of resources the English countryside. Fields are overgrazed through the excessive concentration of livestock on individual farms. Rapid growth and replacement of grass is only secured by the repeat applications of fertilisers, this can have the unfortunate effect of poisoning the grass making it unpalatable to cows. Herbicides to destroy non grass plants leads to the destruction of biodiversity and this impacts on the fertility of the soil. Heavy machinery compacts the soil meaning that rain runs off the soil rather than being absorbed by it, contributing to the heavy flooding of the last winter. Unfortunately the mass production of food stocks through the use of industrial farming methods leads to the degradation of the soil storing up problems for the future.

This essay on modern farming has a wider purpose, what I want to highlight is what happens when that most precious of resources, humankind is abused and degraded. The degradation of the English countryside is but one example of the devaluation of humanity in the productive process. It is not a coincidence that British workers work the longest hours, are paid the least and are the least skilled in Northern Europe. It is a consequence of the Anglo-Saxon management practice that regards people a things, just another commodity, a thing to be used in the productive process as cheaply as possible.

Oliver Goldsmith’s poem ‘The Deserted Village’ could be updated to today, I find his words as true as ever.

Where wealth accumulates, and men decay:
Princes and lords may flourish, or may fade;
A breath can make them, as a breath has made;
But a bold peasantry, their country’s pride,
When once destroyed, can never be supplied.

Although unlike Goldsmith’s village, the village of my childhood is not deserted, but populated by well off refugees from the great urban conurbations.

When I pass through one of the landscapes so beloved of ‘The Campaign for the Preservation of Rural England’, I wonder where are the people that should be working this land. The beauty of the landscape is protected at the price of excluding the rural working classes. They are not fit to muddy the view, instead they are to be banished to the impoverished housing estates in the cities exiled from their rural home.