Isaiah Berlin once remarked that there could be no such thing as a right wing philosophy. This at first puzzled me as the philosophers I studied were generally to the politically right of centre. What I then realised was that although these philosophers were of the political right their philosophies were not. Their philosophies were too enlightened to be confined within the bounds of conventional right wing thinking. A truly right wing philosophy would be founded on the principles of personal aggrandisement, the abuse and exploitation of fellow men (a contempt for the majority of mankind), the extolling of social inequality and social privilege. To express it more simply there cannot be a philosophy of nastiness; it is contrary to the understanding of the that the Greeks gave to this word, which that it is the love of wisdom. Praising greed or inequality cannot be the basis of any philosophy as it is a paean to unpleasant form of self interest.

Having introduced the term pseudo philosophy I need to explain what I mean by the term. A pseudo philosophy is a one that serves to justify the self interest of a particular group. This self interest is always described in terms of a higher idealism, always a theft of universally admired ideals, but ideals that were redrafted to serve a particular narrow self interest. The medieval knight was at his worst was a killer, a rapacious looter and rapist yet this brutality could be justified by chivalry. This knight was a Christian knight, who spent the night before knighthood in prayer at a chapel. A knight who promised to use his strength to protect the poor and weak, treat women with courtesy etc. Somehow those killed by the knights did not fit into any of the protected categories, they were non people excluded by the code for a variety of reasons, for example when the Christian knights stormed Constantinople, the killing of Christian priests and monks was justified as they were heretics.

Pseudo philosophies unlike philosophy have the intention of stopping the advance of human knowledge, they want to stop the clock on change. They want to preserve the contemporary society in aspic or in the most extreme cases regress to a less enlightened age. The militants of Isis in Iraq practise the pseudo philosophy of violence, their rise to power is justified by the need to purge society of non Islamic elements. The barbarity of their regime can only be justified if they remove and destroy the enlightened elements of modern Islam society, as their existence is a constant and compelling criticism of their regime and a reminder that there is an alternative. Barbarity and the lust for power cannot tolerate learning whether it be culture or education as it is in opposition to their barbaric ethos. An ethos best expressed in the words mistakenly attributed to Goebbels, ‘when I hear the word culture, I reach for my revolver’. 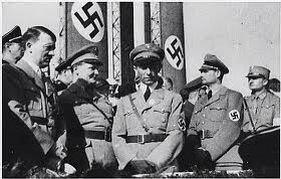 What these pseudo philosophies have in common is a disregard for majority of humanity, who they class as inferior beings, full membership of humanity is limited to elite groups, the medieval knight or the contemporary billionaire. Possibly the cruelest of pseudo philosophies is National Socialism which classified whole groups of people as sub human, such as the Jews, the Roma, homosexuals, the disabled and proceeded to exterminate them. Contemporary pseudo philosophies such as Neo-Liberalism embody this same inhumanity. Ayn Rand a leading prophet of this philosophy also demonstrates a contempt for the masses of humanity. In her novels mankind is divided into two groups the ‘producers’ and ‘looters’, with corresponding physical characteristics. Her producers are square jawed of an angular physique, her looters are weak chinned and have flabby physiques. A caricature of humankind that could almost have been borrowed from the Nazis, with their comparisons of the magnificent physique of the Aryans with the grotesque bodies of the Jews. One critic said that there was the whiff of the gas chambers in her novels

Rand as with all pseudo philosophers is able to dress up her ideas with a moral grandeur suggestive of utilitarian philosophers Jeremy Bentham and J.S.Mill.

My philosophy, in essence, is the concept of man as a heroic being, with his own happiness as the moral purpose of his life, with productive achievement as his noblest activity, and reason as his only absolute.

Unfortunately such grandeur can be deconstructed into the belief that greed is the motor that drives the world. Evil gets redefined as the attempt by the ‘looters’ to deny the ‘producers’ through legislation and its evil begetter over mighty government to rein in and control the wealth producers and creators. Billionaires are her heroes the poor are ‘lice’ and ‘maggots’. Unsurprisingly Ayn Rand is popular with the right, particularly the Republican Right in America. She seems to have been almost as influential as Friedrich Hayek and Milton Friedman in recasting the USA and the UK in the Neo-Liberal mould.

Since the philosophy of Rand, the economics of Hayek and Friedman gives a moral camouflage to the activities of the predatory financier class, it is not surprising that Neo-Liberalism has become the moral philosophy of this class. They by using their financial clout have manipulated the political classes into accepting Neo-Liberalism as the philosophy of the political class. In the UK politicians as in the USA have become totally subservient to the ‘producers’, government now is principally run to facilitate the interests of the producers. Public service (big government) has been diminished through the wholesale privatisation of public services. In their latest act of obeisance they are about the agree the Transatlantic Trade and Investment Programme (TTIP) which will enshrine in legislation the dominance of producers over the political class. If in the future any government has the temerity to force the big corporations to adopt environmental or labour protection policies which they claim could reduce their profitability, they can reclaim those lost profits from the government. Usually when a political class legislates itself into irrelevance it is under the threat of violence as in Nazi Germany, the signing of the TTIP treaty is unusual in that our legislators are wiling signing themselves into irrelevance.

Practitioners of pseudo philosophies such as National Socialism and Neo-Liberals in their anxiety to give their philosophy a more secure cultural underpinning, drift into turning their philosophy into a religion. Towards the end of the Nazi regime the SS tried to reintroduce the old pagan Gods as a cultural reinforcement of Nazism. Neo-Liberals have already made that change. There is for them a superhuman entity that creates, controls and remakes life and that is the free market. All human societies should be modelled on the free market and Neo-Liberals believe that their role is to remake society into the perfect free market, a behaviour that can be compared to those followers of millennial religions. They thanks to Ayn Rand have a belief in a non-rational world view that is not subject to critical analysis, it is just true.

The purpose of my essay is to explain the nature of the enemy, that people such as myself oppose. If you understand your enemy you are better able to fight it. The philosophy that guides the Rand’s producers is a kind of disturbed masculinity and is a threat to the good society. All the sex in Rand’s novels display this disturbed masculinity, it always violent, suggestive of rape. Not a bad metaphor for the financiers who have raped society through their greed, living a damaged broken social world in their wake.