One of the dominant  issues of this election campaign is the fitness of the contending leaders to manage the economy. Quite rightly people complain of this being a boring election campaign, as the big issues that concern us are largely ignored. Given the superficial nature of the campaign what is never mentioned is the incompetence politicians of all parties have demonstrated when managing the economy. Although my essay is about the UK, the issue of economic mismanagement is a characteristic of all governments of the Western world, there are no politicians of the calibre of Franklin Roosevelt or George Marshall. Instead we have a Rand Paul, David Cameron and Angela Merkel none  of whom have an understanding of the current economic crisis.

When I was a teenager the recurrent problem was the balance of payments deficit, there were continuing runs on the pound sterling and the government was constantly having to change  policy to deal with this problem. Now I am in my sixties the problem of the recurrent trade deficit seems to have disappeared, sterling crises are now a thing of the past, although in fact nothing is further from the truth. In the last quarter a balance of payment deficits was recorded that equalled 6% of GDP, whereas in the 1960’s the deficit averaged 0.2% of GDP. Now the deficit is 30 times greater there is no problem! When a senior politician was questioned about this he said ‘times have changed’ and having the largest (in percentage terms) trade deficit in the Western world no longer mattered. Has the world really changed that much or was the senior politician being hopeless naive about the problems of the current trade deficit?

Any reference to an economic textbook will appear to explain this miracle. Today we live in a world economy with freely floating exchange rates. If a country is in deficit the value of its currency will fall (currency traders mark down what they see as weak currencies) making its exporters cheaper and its imports more expensive, so its exports will increase and its imports decrease until the balance of payments is once again in surplus. However this automatic self regulating mechanism has not worked in the case of the UK, as the trade deficit has continued to grow. At one stage the pound sterling had fallen 20% below its 2008 peak and yet the trade deficit continued to grow. Despite the failure of this automatic stabiliser and the growing trade deficit there was no sterling crisis. Foreigners did not clamour to sell devalued pounds on the foreign exchange markets. In fact the growing trade deficit coincided with a increase in the value of the pound sterling.
How has the UK got away with running the world’s largest trade deficit?

Politicians would claim it due to their superior  economic management that there have been no crisis to resemble those of the 1960’s or that of 1976. Whereas in reality they have ignored the growing problem that could provoke a crisis greater than that of 1976.
The UK is at the heart of the world’s financial system and as such it is able to use the foreign currency deposited here to finance its trade deficit. Quite simply the UK is recycling the foreign currency it receives to pay the country’s debts. One economist has quite rightly called it a ‘ponzi scheme’, as to pay our way the UK has to attract an increasing amount of foreign currency  to finance its ever growing trade deficit. If the flow of funds ever slowed down or stopped the UK would be in serious trouble. This is one reason why all governments have made it their priority to ensure that the city of London remains the chief financial centre in Europe. Their greatest fear, if they would have the courage to admit it, is that Frankfurt might come to rival London as a financial centre which would undermine  their current economic strategy.
What are the politicians doing?

Nothing would be one answer, but the truth is that they actively pursuing policies that make the situation worse. Instead of taking on the really difficult task of eliminating the trade deficit, they are promoting the British ‘ponzi’ scheme. Politicians realise that they must continue to keep the funds flowing into London, if they are to avoid being forced into making the difficult decisions that would make them unpopular. Gordon Brown when Chancellor of the Exchequer went out of his way to attract foreign funds to London. He introduced the ‘light touch regulation’ which made London an attractive destination for those foreign depositors that wanted a safe haven for their money, but one from which they could easily withdraw it when needed. Yet it also made London at the same time the world’s largest tax haven. It should be explained that the so called tax havens of the Caribbean and the Channel Islands are only nominally the countries where the offshore money is banked. What they really are accounts held in London but spuriously named as accounts held in Bermuda etc. Consequently London has not only become the home for legitimate investors but also the place which at one remove is the destination for the world’s illegitimate funds. 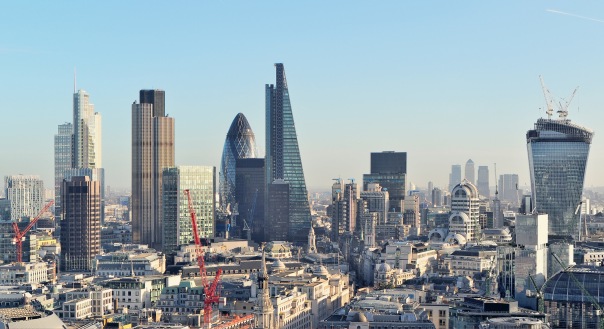 British governments have a long record in aiding the world’s undesirables. When the European Union (EU) proposed stringent measures to control money laundering in banks, Britain opposed the measure and succeeded in preventing their introduction.
George Osborne the current Chancellor has been working hard to persuade the Chinese to allow London to become the official foreign exchange centre for the trading of the Chinese renmibi. If he succeeds there will be all those renmibi’s deposited in London that could be used to pay for our imports from China.
Why is this policy so foolish?
Obviously any policy that depends on the rest of the world depositing ever increasing amounts of their money with us is foolish. There will inevitably be other financial centres developing that attract the world’s funds, London cannot for ever be the world’s number 1. Foreign investors are not  the foolish suckers that are  attracted to ponzi schemes, they can read the market as well us any London banker. It has been forgotten that in 1990 one astute fund manager (George Soros) almost bankrupted the UK with his astute speculation in the foreign currency markets. The UK will be the recipient of the world’s funds as long as it suits the rest of the world, but that won’t be forever. Unfortunately the government and all the leading politicians have never considered this possibility and prepared for that eventuality.
The UK being the world’s foremost banker is very susceptible to changes in the world’s currency markets. Any large outflow of funds would be catastrophic for the following reason. London borrows short and lends long, what this means is that money that is deposited in London on short term notice is then loaned out  for longer periods time. At the height of the property boom 80% of the  bank’s loans were made to the property market. Not only is it difficult to get money back quickly which has been invested in bricks and mortar, but the value of those loans is subject to market volatility fall rapidly in  a crisis. The prices in the British property market are subject to a speculative surge that can easily reverse itself. In consequence not only will the banks have trouble repaying those loans, but the value of those loans will have decreased, making it impossible for the banks to repay their foreign depositors. To repay these loans the banks would have to rely upon the Bank of England drawing on its foreign currency reserves to bail them out. History demonstrates that those reserves can soon be exhausted and in such a scenario the UK would need the largest loan in the IMF’s history.

Mark Carney (Governor of the Bank of England) has imposed reforms on the banks making them hold greater reserves to fund a run on them in a  crisis. However it has been suggested that in a crisis of the type that occurred in 2008/9 these measures would be inadequate.
Perhaps the worse consequence of this policy is that the government will be tempted to implement more and more foolish policy measures in a desperate attempt to attract more and more funds to this country. This is why the UK is always the one country no matter which party is in power to oppose any meaningful reforms of the worlds financial markets, as they are terrified of any change that might reduce the flow of foreign funds to London.